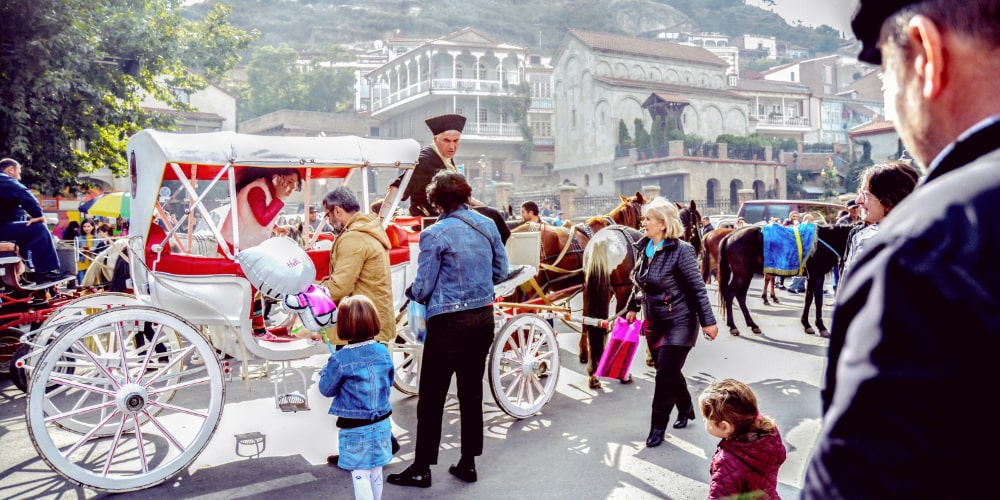 Book romantic tour "Valentine's Day Travel" – and this year, your Valentine’s Day will be even more special. Romantic road trips are one of the best ideas for a Valentine’s Day to remember. All that’s left is choosing the best destination for a guaranteed romantic escape!
If you haven’t planned anything romantic yet and are running out of time, we have a few ideas to help you impress your partner by sweeping them away for a last-minute getaway. There are several primary reasons why you and your honey should get up to Georgia: romantic Tbilisi, historical sights, beautiful nature and thousand happy photos.
The rest of your Valentine program promises many other pleasures: stride along the Mtkvari, day trip to Sighnaghi and candlelit fine dining at national restaurant...

The best romantic road trips for couples are the ones that give you the space and privacy to focus on nothing but yourselves. After a romantic trip, you will return home in love with Georgia.

Arrival and Meeting in Tbilisi airport.
Transfer to the hotel. Check in.

Dinner in restaurant, you can taste national cuisine and enjoy live music and National Georgian Dances.

Day 2
Breakfast in the hotel. Tbilisi and Mtskheta city tour:

Dinner in restaurant (for additional fee). Way back to Tbilisi.

Day 3
Breakfast in the hotel. Moving to Signakhi – city of love is located in Kakheti region, which is consider as a wine region. Signakhi is surrounded by defensive wall with watchtower from you can enjoy fantastic views of the Alazani Valley covered with vineyards and mountain peaks. 2 km far from Signakhi is situated Bodbe monastery, where rest reliquiae of representative of the Enlightenment, equal to the Apostles Nino famous among tourists and pilgrims. Straight after excursion we will head off to wine tasting and dinner.

Day 4
Breakfast in the hotel.
Check out. Transfer to the airport.
Happy flight and soft landing!
We will be glad to see you again in Georgia!

Price on a tour "Valentine's Day Travel" 4 days / 3 nights. The prices are given per person.