Tour to the past of Georgia | Vacation Packages

Tour to the past of Georgia 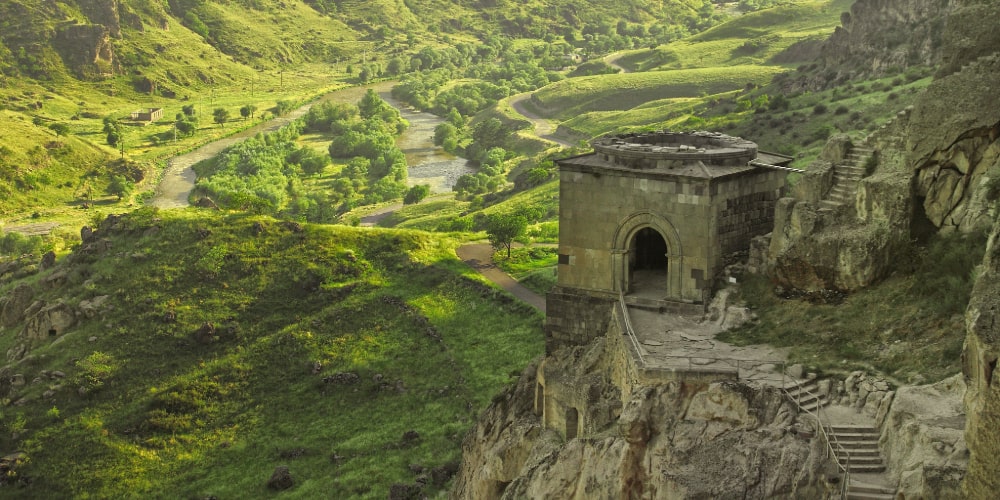 Guided program «Tour to the past of Georgia» least 7 days/6 nights. We selected most interesting routes in our author's tour around Georgia with departure from Batumi. Georgia is an interesting country with centuries-old traditions. Historic sights, beautiful nature, cave monasteries and Georgian cuisine are waiting for you. And one of the main natural attraction that we will visit during the tour is Martvili Canyons. Here you can see how wind, time and water can create a very unusual canyon. If you are planning an interesting trip to Georgia, then this tour is for you.

What is the advantage of our individual tour? - You plan the trip yourself, you do not need to adapt to any conditions and dates. We can also supplement or adjust the program to your request.

You may like our combined tours - Georgia and Armenia, during which you will visit two ancient capitals. Tours to Armenia and Georgia - are a good option for those, who love history and want to plunge into the warm sea and sunbathe on the beach.

Excursion program of a Tour to the past of Georgia

Day 1
Arrival and Meeting in Batumi airport.
Transfer to the hotel. Check in. Overnight in the hotel in Batumi.

Day 2
Breakfast in the hotel. City tour in Batumi.

Day 3
Breakfast in the hotel. Trip to Kutaisi. City is very interesting for its historical points, the most of which are under the protection of UNESCO. Today you will visit:

Overnight in the hotel in Kutaisi.

Day 4
Breakfast in the hotel. Trip to Vardzia.

Overnight in the hotel in Kutaisi.

Day 5
Breakfast in the hotel. Departure to Batumi.
As soon as we will leave Kutaisi on the way we will visit city Martvili, with the main sight – Martvili Canyons which are discovered recently, but have already become the popular rest place for tourists and locals. Beautiful canyon is eroded by limestone’s of Abasha River and consists of two part – Upper and Lower, washed out by mud flat. In the upper part are floating the boat, in the lower part walking and swimming. It is always chill at canyon, even in the hottest summer day.

Last stop is in abandoned city Nokalakevi. City ceased to exist during invasion of arab commander Mervan. Before that city was a capital of Egriss Kingdom and Greek administrative centre called Archeopolis. Bronze Age ceramics was founded on site proving that one of the many Colchis cities were situated here. It is likelihood that settlement exists even in XIII BC and namely this was capital of Colchis, where the Argonauts travelled for Golden Fleece. Archeopolis for Georgia is like Troy.
Overnight in the hotel in Batumi.

Day 7
Breakfast in the hotel.
Check out. Transfer to Batumi airport.
Happy flight and soft landing!
We will be glad to see you again in Georgia.

Price on Tour to the past of Georgia. The prices are given per person.