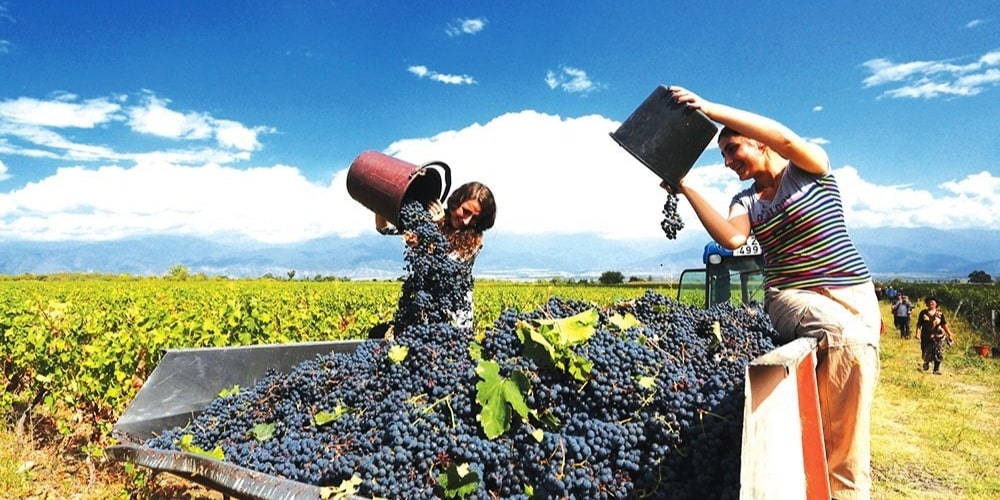 Tour "Rtveli in Georgia" - the grape harvest in Kakheti is designed specifically for our guests. It is not just an excursion program in Georgia. Interesting sights, grape harvesting and tastings included in the tour. Guests will attend in a real family holiday – Rtveli. The 6-day tour “Rtveli in Georgia” combines two programs: a wine-gastronomic tour and a sightseeing tour.

We have developed tours in Georgia, trying to combine the maximum number of interesting and characteristic sights. Our tours to Georgia include visiting the wineries and the most colorful cities of the country. In addition, you have the opportunity to have a delicious dinner in a real peasant family and try homemade dishes.

You will spend 6 unforgettable days in sunny Georgia and even free days will not be wasted on Rtveli. During the week, you will have time to see all the most interesting in Georgia!

Arrival and Meeting in Tbilisi airport.
Transfer to the hotel. Check in.
Overnight in the hotel in Tbilisi.

Breakfast in the hotel. Tbilisi and Mtskheta city tour.

Lunch in the restaurant (additional fee).

Return to Tbilisi. Hospitable and full of vitality, Tbilisi is happy to open its doors to the guests. Here you can hear the soft south flow of the Mtkravri River. For centuries, Tbilisi has been pleasing to the eye and has fallen in love with travelers with its old churches and monasteries, narrow streets and hospitable hosts. It is impossible not to fall in love with the city, which opens its heart and shows you the most secret places of interest.

Breakfast in the hotel. Today you will get acquainted with the wine region of Georgia - Kakheti. You will be pleasantly surprised how historical sights here combine with grape valleys, how urban landscapes merge with rural ones.

After the excursion program, we will go to the grape harvest, where we ourselves will harvest grape and will learn to make delicious Georgian wines. In the evening, a real Georgian feast with toasts and homemade food awaits us.

Overnight in the hotel or guesthouse in Kakheti.

Breakfast in the hotel. Continuation of acquaintance with Kakheti region:

Day 6
Breakfast in the hotel.
Check out. Transfer to the airport.
Happy flight and soft landing!
We will be glad to see you again in Georgia!

Price on a tour "Rtveli in Georgia" 6 days / 5 nights. The prices are given per person.